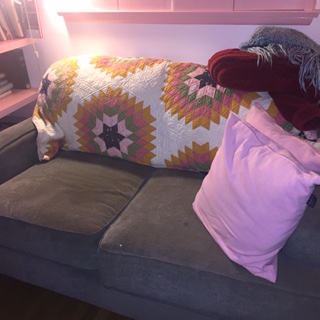 I sit each morning at my window that faces east toward the rising sun. Behind and  sometimes around me is an antique quilt, passed down to me by Betsy, my spiritual director of nearly 25 years, who died suddenly on Good Friday. She had been in a process of recuperation for the past five months, and we had spoken a few times on the phone, but we had scheduled face to face appointments for the next three months. Instead of seeing her in person, I will be sitting with her spirit in  the space she blessed for me with her generous gift.

She embodied the spiritual director as a Quilter in my life, taking ragged, old pieces of experience and belief, and with skill and patience helped me to envision and live into my own ongoing present life with the Holy, a wholeness, a work of art. We came from differing faith traditions. Initially our callings were very different–mine in public ministry, hers in intimate spiritual direction. Our family systems were a contrast in culture, size and sensibility. Yet from the start we were united in our quest for an intentional life of Spirit.

I have been musing these past days over all that I learned in my hours with Betsy. With the gospel writer I could say that if I were to recall everything, the world itself would not be able to contain it. However, as I grieve and remember, I keep assembling “squares”in the quilt that was gathered together in the years of our shared spiritual journey.

She often remarked on the fact that we were two Elizabeths seeking a spiritual path in the Christian tradition together. And in her loss I have peace as I mourn in the words of the Elizabeth in the gospel of Luke, who when entrusted with the momentous event in the life of her cousin Mary who was to be the Christ-bearer, sang with joy: Blessed is she who believed that there would be a fulfillment of that which was spoken to her by the Lord. (Luke 1:45). Betsy believed that she was in the hands of the Holy One in all parts of her life, and her belief nurtured and nourished my belief. When I sit on my couch each morning, I will believe that Betsy’s life here has been fulfilled, and is still being fulfilled in my own. I am grateful!

3 thoughts on “Blessed is She Who Believed”